It's official: Xiaomi 12S series with Leica-tuned cameras is coming on July 4

The Xiaomi 12S that leaked last month will be officially unveiled next week - on July 4. This revelation comes from Xiaomi, which also said that the 12S will be joined by the 12S Pro and 12S Ultra at the event.

Xiaomi also confirmed its partnership with Leica for the cameras on the 12S series and gave us a glimpse of the three smartphones. 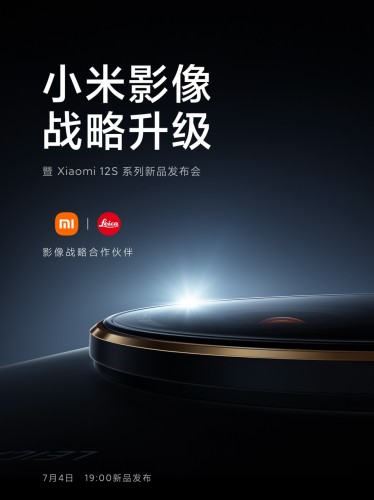 Xiaomi hasn't detailed the specs sheets of the 12S series smartphones yet, but the company said the 12S is a small-sized high-end flagship, whereas the 12S Pro is 2022's new flagship standard. The 12S Ultra is touted as the "new height of mobile imaging flagship."

You can expect Xiaomi to share more information about the 12S lineup in the lead-up to the event next Monday.

Really? you should check how many iphone 13's sold in china last quarter of 2021. You are terribly misinformed.

Well try using both and compare them.

Apple only sell well in English dominated regions. Because people in these area were believe in western mefia narrative that only Apple is the best. In lots of other countries apple have market share as low as 0.3%. Without the anti ch1nna sen...

Hyundai Ioniq 5 N will arrive in 2023 Chip shortage in the automobile industry eases, but will remain throughout 2023Electric Mini Aceman spied for the first time
ADVERTISEMENTS