The Samsung Galaxy A30 is receiving its second update of the month in India which carries version number A305FDDU1ASD5 and weighs 180MB in size.

This new firmware improves the GPS performance of the Galaxy A30 as well as the stability of the proximity sensor and audio. The update should reach all units in a week or two, but if it doesn't, you can try pulling it manually by heading over to your phone's Settings > Software Update menu. 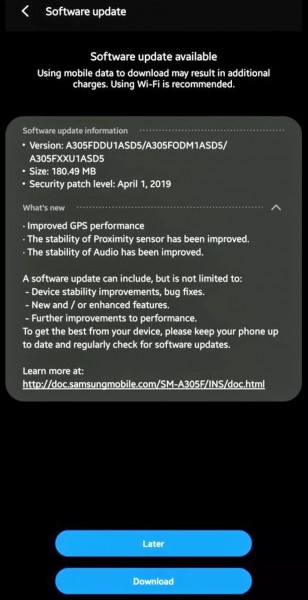 The Galaxy A30 features a 6.4-inch FHD+ Super AMOLED Infinity-U display and has Exynos 7904 SoC at the helm which is coupled with 4GB RAM. The smartphone has a dual camera (16MP+5MP) setup at the back and a single 16MP shooter on the front. The Galaxy A30 comes with 64GB of onboard storage and has a 4,000 mAh battery under the hood.

Why are all smartphones so massive today??