Update: Following the image of the Z5X's battery life, the same source posted some alleged alleged specs of the phone before they were posted to Twitter.

I've got some of the confirmed specifications of the Vivo Z5X.
6.53-inch display with a punch hole camera
5000mAh battery (the thickness of the device will be around 8mm)
The source also suggests that the device will come at a budget friendly price.#vivomobiles #vivoz5x #vivo pic.twitter.com/PEXiNTQHoT

Here's your first look at the vivo Z5x in the wild, courtesy of vivo Product Manager Wu Fang.

He shares that the Z5x has a 6.53-inch screen (with a punch hole camera), is 8mm thick and has a good grip. The photo also reveals that the phone has 13% of its 5,000mAh battery left after 14 hours of gaming during a 2 day period - impressive. 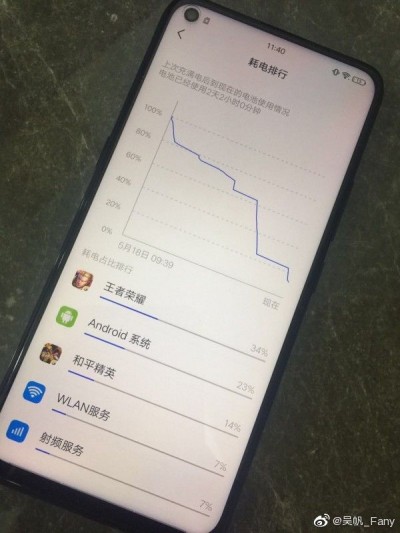 The vivo Z5x should arrive soon and we expect it to run a Snapdragon 670 or 675, Android 9 under Funtouch 9 OS and be priced somewhere around the €200 mark.

If that's the case, then the whole story ASUS made about making the phone smaller/compact was an out-right lie. I mean they left out the Wireless Charging and Super-fast charging on the reasons of thickness. I would gladly take both features int...

I'm just able to recognize the first one It's Arena of Valor, Tencent mobile version of League of Legends :3